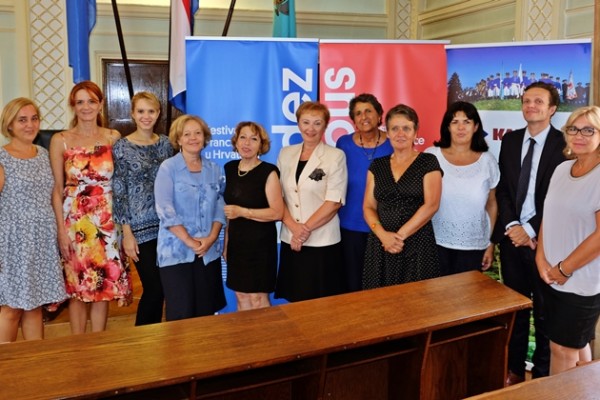 As one of the events of the Festival of France in Croatia “Rendez-Vous”, which is held from May to September 2015 with over 150 events in 22 cities in Croatia that present the contemporary France, the panel discussion “Valorization of cultural heritage” was held on September 2, in the City Hall of Karlovac. It was supported by the City of Karlovac and the City of Dubrovnik and organized in the collaboration between the Croatian Association of Historic Towns (HUPG) and the French National Association of the Cities of Art and History (ANVPAH & VSSP).

In front of a large auditorium composed of professional public and individuals interested in the subject, the participants exchanged on current issues of the protection, valorization and management of cultural heritage and historic cities. Deputy Mayor, Ms. Marina Kolakovic gave a few words of introduction:

“The historical heritage of Croatia and of the City of Karlovac is rich and it is our responsibility to protect it. We want to learn from the experts, and perhaps one day we will also be an example of good practice in the field of cultural heritage valorization”.

The Ambassador of France in Croatia Michèle Boccoz and Deputy Minister of Culture of the Republic of Croatia Sanja Saban congratulated the organizers for the choice of this subject and the quality of the speakers. Mrs. Saban stressed that the Festival of France in Croatia is the result of cooperation between the two countries in 2012, when the Croatian artists went to France. This panel discussion is also an example of sustainable inter-sectoral collaboration – urban planning, culture and tourism. Madam Ambassador Michele Boccoz emphasized the importance of networking and cooperation in the revitalization of historical heritage. The architectural heritage cannot be the concern of the state only. It must also be that of municipalities and cities, citizens’ associations and citizens themselves. International cooperation is also important for the conservation and promotion of heritage, not only to preserve the local identity, but the identity and culture of Europe.

Representatives of the French National Association (ANVPAH & VSSP) Anna Maria Spano, Deputy Mayor of La Rochelle; Josiane Tricotti, architecture and heritage animator of the city of Menton and Caroline Cousin, Director of the Department for the Valorization of Architecture and Heritage of the city of Pau, presented to the professional public and citizens of Karlovac the examples of valorization and cultural heritage management in their French communities.

Josiane Tricotti presented Menton, agricultural city that is transformed in the nineteenth century into a modern destination of the French Riviera. One of the consequences was the emergence of the mass tourism. She showed the strategies to achieve a balance between urban development and heritage conservation by stressing the important role of city services for the work on sustainable tourism throughout the year.

Anna Maria Spano presented the city of La Rochelle, which develops many programs for the revitalization of the historical center and works on raising the awareness of the local population. She showed the urban policy of the city for the protected area (PSMV); strategies for preserving life in a historical city and promoting the emergence of a contemporary expression to create the heritage of tomorrow, because the protected zone is not a museum. The new buildings are signs of an economic and social dynamic. In this sense, the Plan for Protection encourages architectural creativity. In addition, the citizens have a right toaccess all project documentation showing that an appropriate communication and a dialogue should be considered. Also, when a large scale project is launched, a special procedure of a public inquiry needs to be followed which allows people to express freely their opinion on the project in question. It is through decentralization that a consultation has become a legal requirement for communities. Ms. Spano has presented some specific projects in which citizens were directly involved.

Caroline Cousin presented existing cultural heritage management and protection strategies in the city of Pau introduced in 2007 – the ZPPAUP (Protected Architectural, Urban and Landscape Areas) – a decentralization law from 1983. Thanks to this law, an active approach of study, conservation, valorization of architectural heritage and the living environment is being implemented in Pau. Great importance is given to the label “Town of art and history” a powerful tool for the public policy of the City. The main objective of this label is to create synergies between actors and cultural sector and to give meaning to the heritage policy of the community.

Following these presentations, the Croatian public and professionals of the city of Karlovac have found that despite the higher level of the legislation in France, it is not always easy to apply laws and to use all existing protection tools in practice. The French and Croatian cities have similar problems. The key to achieve an effective protection and valorization of the cultural heritage lies in the collaboration of all stakeholders: government, local authorities, associations, cultural institutions, professionals and citizens. It is not only about protecting the heritage, but also about using it as a sustainable resource.