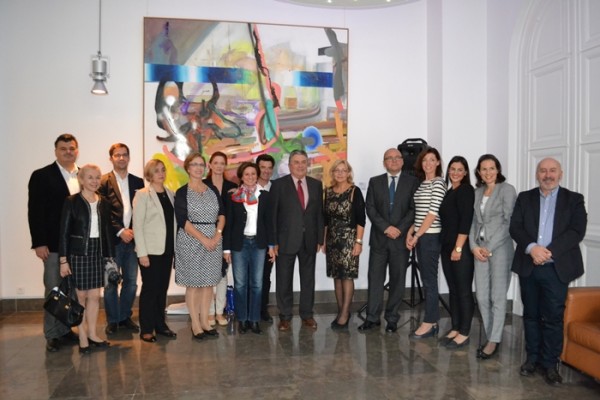 Study visit to the French region of Languedoc-Roussillon (04.-10.11.15.) was organized by the Croatian Association of Historic Towns HUPG, in collaboration with the French Association of Towns and Regions of Art and History and Protected Areas (ANVPAH & VSSP), the French Ministry of Foreign and European Affairs, the French Embassy in the Republic of Croatia and the Languedoc Roussillon Region. The aim of the trip was to learn about the system of protection and presentation of cultural and historical heritage in France and its sustainable use for touristic and economic purposes. Croatian Delegation was presented with examples of sustainable development of cities with rich historical and cultural heritage, both large and smaller ones, together with an example of cross-border cooperation between France and Spain in the Catalonian valleys of Tech and the Ter.

Representatives of the Croatian historic cities of Dubrovnik, Split, Trogir, Varazdin, Karlovac, Rovinj, Solin and Klis Municipality thus visited the Pont du Gard, the site under the protection of UNESCO, and the city of Nimes, where they had a chance to meet the Mayor and Senator of the French Republic Mr. Jean-Paul Fournier ; the First Deputy Mayor in charge of modernization and evaluation of public policies and a member of the European Parliament Mr. Franck Proust,  and the Deputy Mayor in charge of tourism and tourist promotion of heritage and a member of the Regional Council Mrs. Mary Bourgade.

A part of the presentation of the city and a discussion with representatives of Nîmes and State architect-conservationist Mr. Jean-Paul Pribetich, the actions which have been taken in the city of Nîmes in order to enter the List of UNESCO were also presented emphasizing  the concept of continuity of life from the age of antiquity and the integration of modern architecture. In addition, Croatian Delegation was welcomed at the headquarters of the Region of Languedoc Rousillon in Montpellier, represented by the Vice-President in charge of social affairs, youth and education, Mrs. Beatrice Negrier.

At the headquarters of the Tourism Office, Croatian Delegation met with representatives of the city of Pézenas, led by Mrs. Edith Fabre, Deputy Mayor in charge of heritage, handicrafts and tourism. In the town of Céret Mrs. Aurélia Greiveldinger presented the project “border province of art and history,” – the Catalan river valleys Tech and Ter involving cooperation of 11 towns of the French and Spanish border area in the eastern Pyrenees. In the town of Amélie-les-Bains the Delegation was welcomed by the mayor, Mr. Alexandre Reynal who presented the project of rebuilding the abandoned military hospital on the principle of public-private partnerships. In Saint Laurent de Cerdans two examples of restoration of old crafts were presented: centuries-old tradition of textile and espadrille making, which today still employs local population. The cities of Sant Joan de les Abadesses and Prats de Mollo were represented by their mayors Mr. Ramon Roque I Rio and Mr. Claude Ferrer.

The last two days were dedicated to Aix-en-Provence, the reception in the City Hall and the city tour with an emphasis on architectural development from ancient to modern times. Croatian Delegation also visited Marseille and the new Museum of European and Mediterranean Civilizations (MUCEM) – its unique architecture and successful interpolation with the nearby medieval fortress of Saint-Jean.