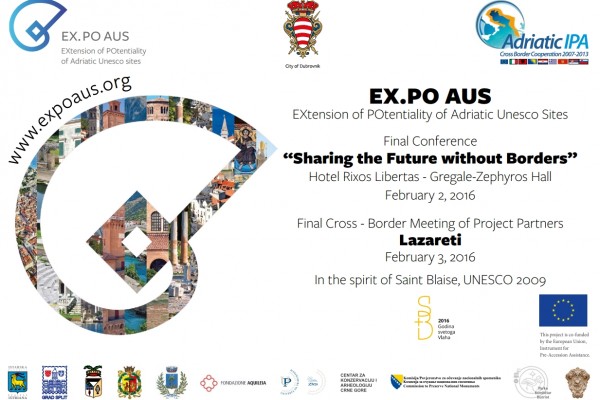 The final conference of EX.PO AUS “Extension of potentiality of Unesco Sites” financed by the IPA CBC Adriatic program 2007-2013 will be held  on the 2nd and 3rd of February 2016 at the Rixos, organized by the City of Dubrovnik, lead partner of the project.

International Conference under the title: “Extension of potentiality of Adriatic Unesco Sites – Sharing the Future without Borders” will be held on 2 February 2016. It is intended for the general public, experts, professionals and institutions in the field of heritage management strategies, cultural tourism, energy efficiency, etc.

Final event will bring together all 12 project partners from 7 countries of the Adriatic region, which are members of the EU and others. In the past 3 years, they were working together to create a future without borders.

On the 3rd of February 2016, the project partners will meet in the renovated complex Lazareti to present their results and discuss the final activities and achieved objectives of the project, which will be officially completed on February 29, 2016.

The two dates were specifically selected because of the Feast of St. Blasius which is part of the UNESCO List of Intangible Heritage and is celebrated every year on February 3. The City of Dubrovnik declared 2016 the Year of St. Blaise on the occasion of 1700 years of the martyrdom of Dubrovnik’s patron.