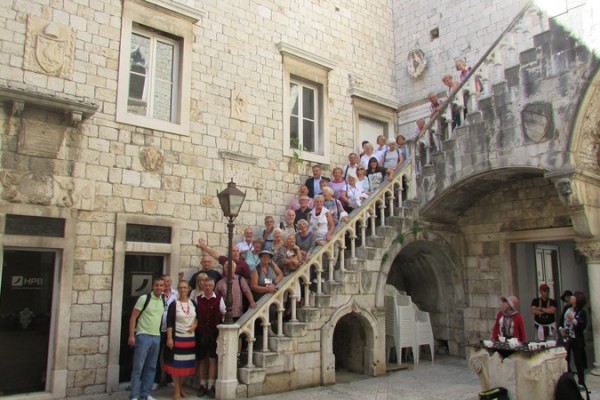 From 4th to 8th September an international conference EURODEM was held in Trogir, organized as part of the annual activities of the City of Trogir in collaboration with partner cities Vattersteten in Germany, Prague 5 Czech Republic and Budapest 11-Újbuda, Hungary.

EURODEM is the project supported by the European Union. The theme of the conference was the promotion of democratic and civic participation, and the presentation of these activities as an essential element for the construction of European citizenship. Through the promotion of democratic participation, the objective was to create a platform and encourage exchange of experiences and intercultural cooperation between the project partners and European citizens in order to promote their participation in the EU. Furthermore, the purpose of EURODEM is to create connections within the Member States and give them the opportunity to learn through the exchange of good practices, the dissemination of knowledge and active participation of citizens. In this way, EURODEM creates the platform for the participation and cooperation of experts, organizations and local population. The model of this project implemented in the city of Trogir included a variety of interactive activities such as presentations, conferences, round tables, discussions and workshops, and has proven to be the right model for the transmission of knowledge.

The conference hosted a number of prominent speakers such as Martin Meyer, the Croatian office of the European Commission, Koraljka Raljević of the Government Office for Associations, Marko Milic from the CEDRA, Ivo Grga from the European Movement, Snjezana Lisicic, Danko Radic and Ana Jakic. The EURODEM project was held simultaneously with the September Festival (Rujanfest) from 4th to 7th September 2015 organized by the City and the Trogir tourist office. Admission to all events was free.

As part of the planned activities on the last day of the EURODEM a memorandum signing ceremony was held in order to agree on the future cooperation and to ensure the sustainability of the project. It was signed by the representatives of delegations from the partner cities which attended the conference. Trogir was represented by the mayor Ante Stipcic and his deputy Radovan Slade Silovic who welcomed the participants and wished they keep a good memory of Trogir. Representing the organizers, Patricia Pavlov, the head of Department for the EU funds and economic development, said that it is particularly important to ensure the sustainability of this project. Besides many conferences, the second day of the event, workshops with delegates from the partner cities were organized in the primary school “Petar Berislavic”. The workshops dealt with topics of democratic engagement, participation of EU citizens and cooperation between the partner cities for the development of civil society.