For the third consecutive year the event “Industrial Heritage of the City of Sisak” will be held in this city. The purpose of this event is the presentation and revitalization of extremely valuable industrial heritage that marked the history of the city of Sisak in the second half of the 19th century to the present day. The program also celebrates the European Year of industrial and technical heritage. 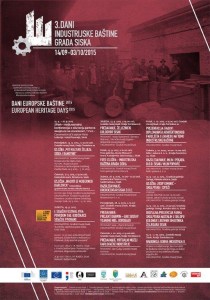 Organizers: The Department for Heritage Conservation of the Ministry of Culture, Sisak; The City Museum of Sisak and the “Striegl” Gallery.

Sponsors: Ministry of Culture, The Sisak Region, The City of Sisak