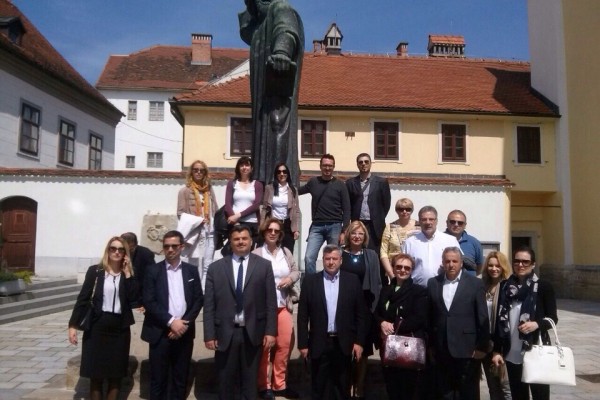 Croatian Association of Historic Towns celebrated its 5th anniversary on the General Assembly at the City Hall in Varazdin on the 6th of May. 15 representatives of Croatian historical towns-members of the Association attended the Meeting, together with the representative of the French Embassy in the Republic of Croatia mr. Stanislas Hubert, attache for administrative and European Cooperation; representative of the Ministry of Culture Mr. Davor Trupkovic, Assistant Minister of Culture; representative of the Ministry of Tourism, Ms. Vesna Rajkovic, Head of Sector for the development of entrepreneurship in tourism, sustainable development and special forms of tourism; as well as professional associates Dunja Babic and Marina Batinic, and representatives of the City of Varazdin – Mr. Vjeran Radelic, deputy mayor of Varazdin, Ms. Mirna Kezele, head of the Department of Affairs of the City Council, local government and general affairs, Mr. Mario Sambolec, Head of the municipal system and urban planning, g. Drazen Dretar, head of protocol and Ms. Marijana Jambresic, Associate – Administrative Secretary of deputy mayor.

The session also included the elections and thus the new president of the Association was elected by the members – it is decided that for the next two years the Municipality of Klis, represented by Mr. Jakov Vetma will chair the Association, while the Deputy Presidents will be the mayors of the cities of Rovinj, Trogir, Karlovac and Varazdin, and the Secretary General is as before Ms. Biserka Simatovic.

The day before, the gala dinner was organized in the Old Town for the guests and a guided tour of Varazdin. A workshop was held in the Herzer Palace where the measures of cultural heritage preservation of the historical center of Varazdin were discussed.

Soon we will publish the official statement and summary of the session.