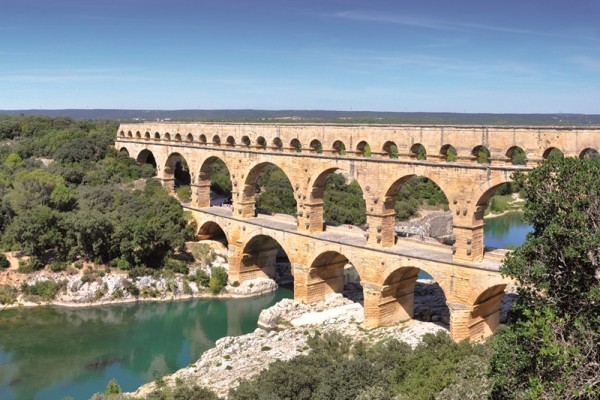 Representatives of several Croatian historic towns – members of the Association HUPG: Dubrovnik, Varazdin, Trogir, Karlovac, Rovinj and Klis, are participating in a study visit to France in the Languedoc-Roussillon region during one week, between 4 and 11 October. This trip is the result of collaboration between the two associations HUPG and the French National Association (ANVPAH & VSSP). The trip is supported by the Languedoc-Roussillon Region and the Embassy of France in Croatia.

The purpose of this visit is to gain a first-hand experience about the methods and strategies for the protection and valorization of the cultural heritage. It is also an opportunity to learn and create new opportunities for collaboration between the two countries in order to implement similar projects in Croatia. The Croatian delegation will visit several cities and exemplary historical sites such as the Pont du Gard inscribed on the List of UNESCO World Heritage where they will be presented with the management strategy and interpretation of the heritage. Afterwards, a meeting will be organized in the city of Nîmes and the guided tour of this city – candidate for the World Heritage label. Our Croatian delegation will have the opportunity to ask questions and discuss the issues of cultural heritage management with the French experts. The delegation will also be officially received in the Hotel de Region in Montpellier. In the following days they will visit the city of Pézenas and the House of Crafts but also the Catalan Valley and the towns of Ceret, Amelie-les-Bains, Saint Laurent Cerdans, Prats-de-Mollo together with the small Spanish town Sant Joan de les Abadesses. The last two days will be devoted to the discovery of protected sector of the city Aix-en-Provence and visit to the Museum of European and Mediterranean Civilizations (MUCEM) in Marseille.